Cordoba majestically displays the signs of its golden age when, under the Umayyad caliphate in the 10th century, it emerged as the most powerful and populated metropolis of the West.

The testimony to its grandeur is visible upon arriving through the majestic pedestrian Roman bridge, which crosses the wide Guadalquivir river, and the magnificent Mezquita, one of the largest mosques in the world.

Beside the temple, La Judería (the old Jewish quarter) retains its synagogue and a marvelous network of white passageways and blossoming patios, revealing the discreet elegance of the old capital. 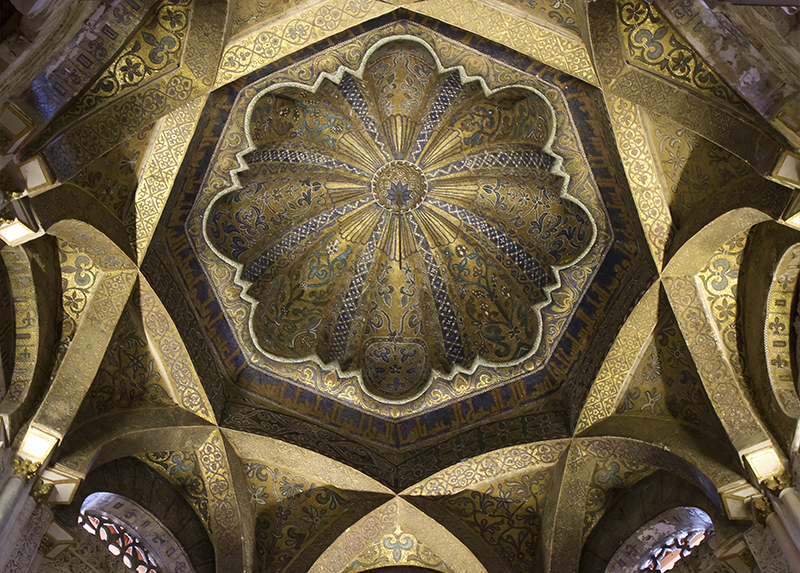 THE MOSQUE AND THE JUDERÍA

Travel back in time, when Cordoba was the most prosperous metropolis of the West during the Umayyad caliphate over one thousand years ago. The main witness of this golden age is the Great Mosque. The prayer hall is composed of a spectacular forest of more than one thousand columns of marble, jasper and granite. This masterpiece of Islamic architecture, a result of successive extensions and embellishments during more than two centuries, displays the evolution of the Cordoban Umayyad art. In the heart of the prayer hall stands up the vertical Cathedral, combining remarkable works of the Renaissance and Baroque art. Outside the sacred space, the grace of Cordoba lives on in the Judería (the old Jewish quarter), which safeguards the labyrinthine medieval structure, graceful mansions with blossoming patios and a synagogue of the 14th century. Duration of the tour: 2 h 30 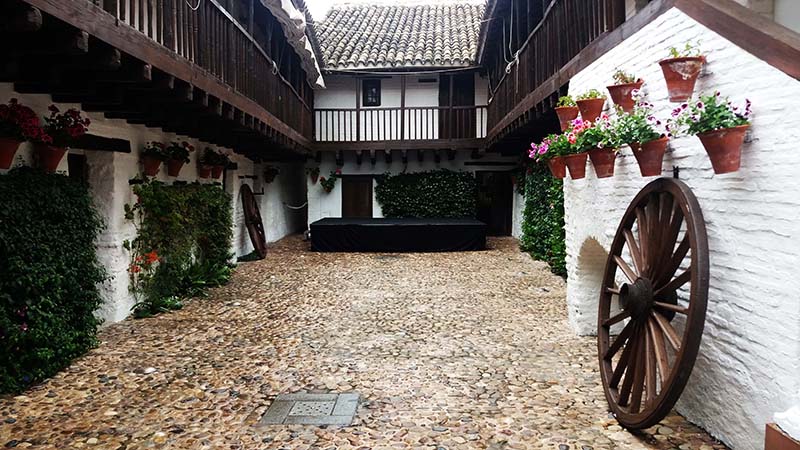 THE ESSENCE OF CORDOBA

Discover the essence of Córdoba in this guided tour through the most beautiful houses with blossoming patios in the historical city centre. Visit the elegant Viana’s Palace, showing the evolution of the Cordovan aristocratic architecture and a collection of 12 charming courtyards. Visit to the Museum of Julio Romero de Torres, who immortalized the beauty of Andalusian women in his paintings. Have a break in some of the traditional taverns, to taste the local Montilla-Moriles wines. Duration of the tour: approx. 2 h 30. 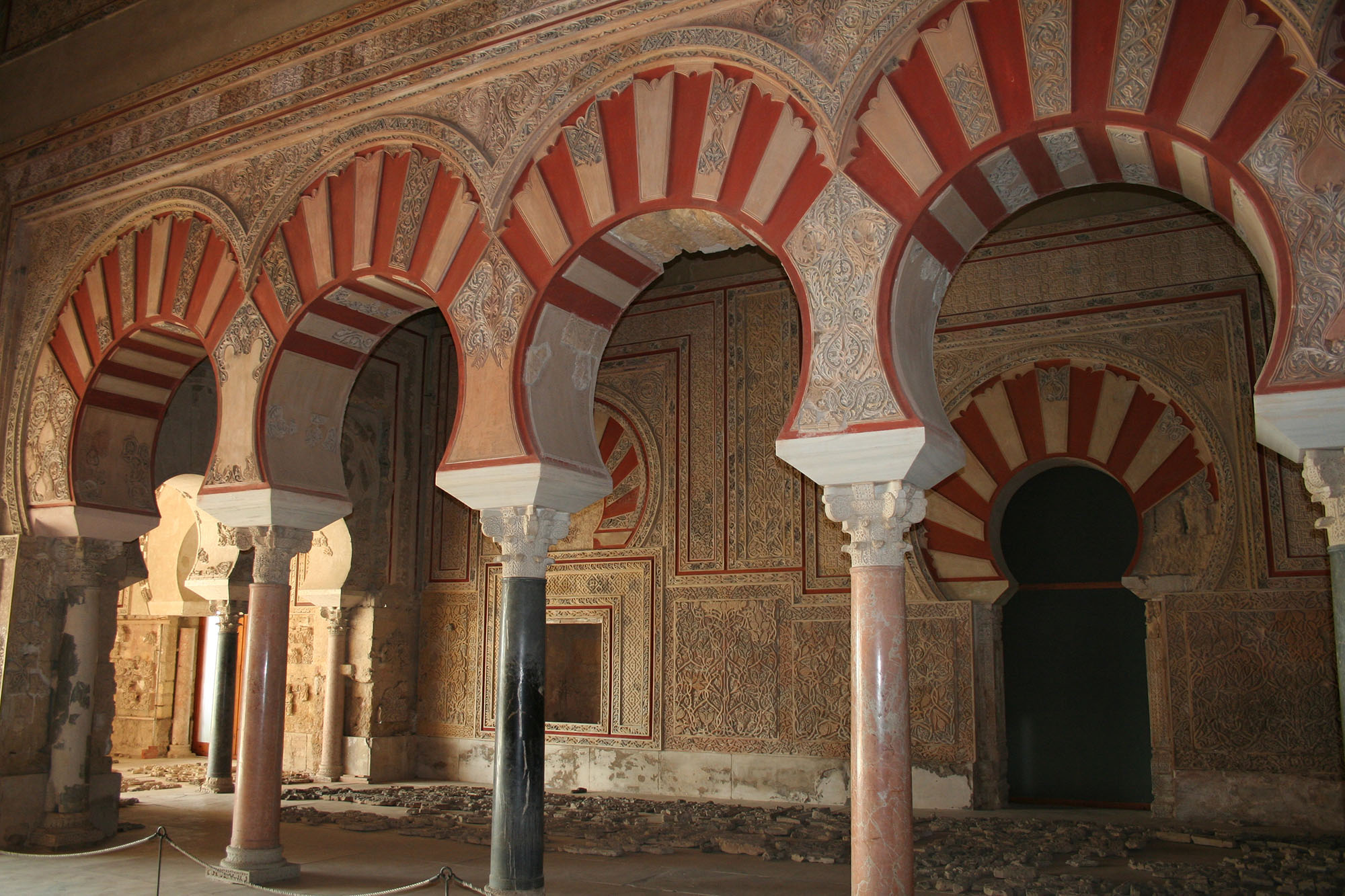 It would be a crime of lèse-majesté to depart Cordoba without taking a short detour of 5 miles to the west, to discover the archaeological site of Madinat al-Zahra’. Situated on the lower peaks of Sierra Morena, the complex was a shining beacon of culture during the peak of the Umayyad rule in the 10th century. It hosted the court, the dwellings of the administration, the royal workshops, and a whole town at the service of the caliphs. Organized hierarchically on terraces, the city was dominated by the palatial and protocol areas, worthy of the Arabian Nights. According to the Arab sources, the palaces had ceilings covered with gold, pearls and precious stones inlaid in the lavish marble decoration, ivory capitals and a pond with mercury to reflect these wonders. The Eastern Hall (or Hall of the Throne), the House of the Viziers, the mighty portico of the military parades, or the mansion of the Hajeb (chamberlain) Jaafar, were brought to life by archaeologists and partially rebuilt and then covered by fragmented panels of the original decorations. Duration of the tour: 2h 30 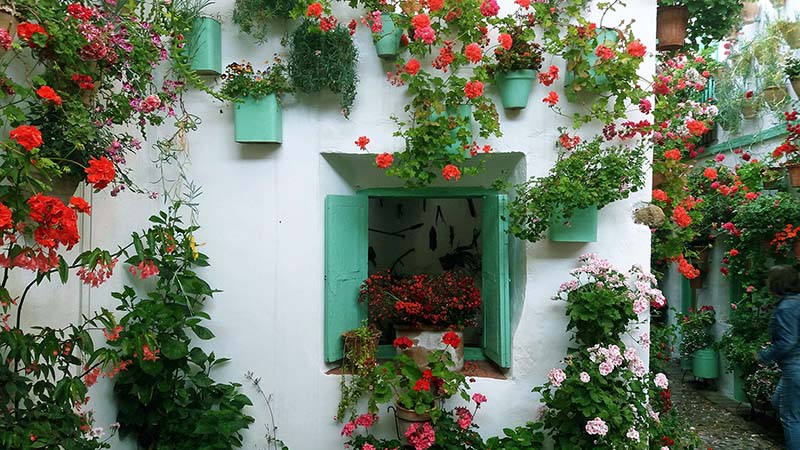 GUIDED TOUR OF THE LUSH PATIOS OF CORDOBA.

In springtime, the courtyards of the traditional and white-washed walls are entirely covered with a myriad of blossoming flowerpots. The presence of the nature in the heart of the traditional Andalusian house is deeply rooted and its origin dates back to the Arab traditions to put the garden, the eternal image of the paradise at home. This tradition is particularly alive in Cordoba, where a competition of the most exuberant 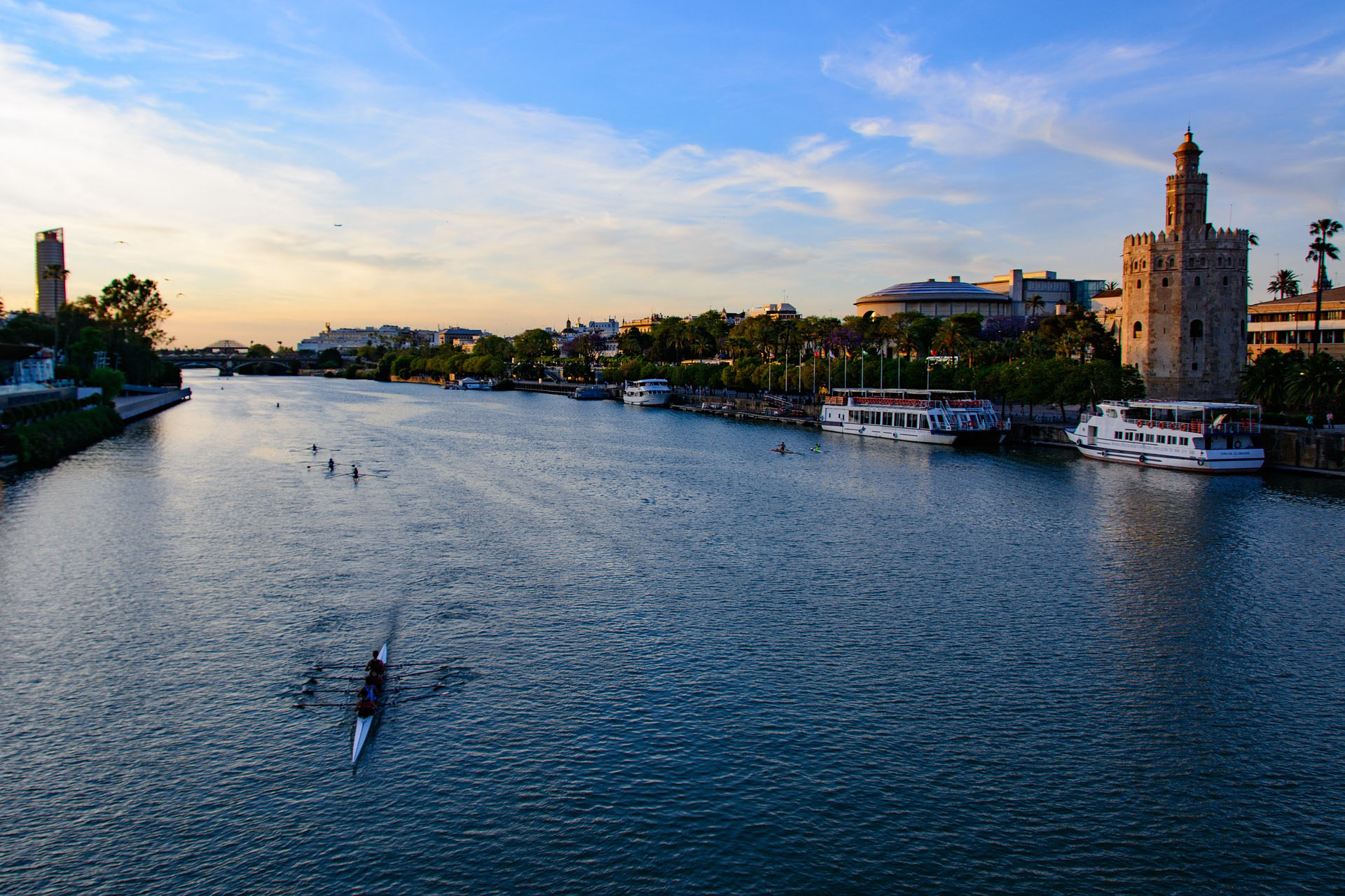 The walking tour, constitutes an essential introduction to the multicultural identity of Seville. Its Cathedral is the largest gothic building ever constructed, replete with works of art. It was built in the 15th century on the site of the ancient great mosque, which partially preserves its Orange Tree Courtyard and the astonishing Giralda, once the lofty Almohad minaret (12th century).The Real Alcázar (Royal Palace) was the seat of power throughout ages and therefore displays in its collection of palaces, dwellings and gardens an extraordinary juxtaposition and intermixing of artistic traditions. The adjacent Santa Cruz neighbourhood, which partially sheltered the Jewish quarter, maintains a distinctive way of life in its labyrinth of passageways, peaceful squares and blossoming patios. Duration of the tour: approx. 3 h 30. Your guide might suggest you the finest restaurants in town. Trip to Seville by High Speed Train (only 45 minutes), by private chauffeured car or rented premium car (1h 30). 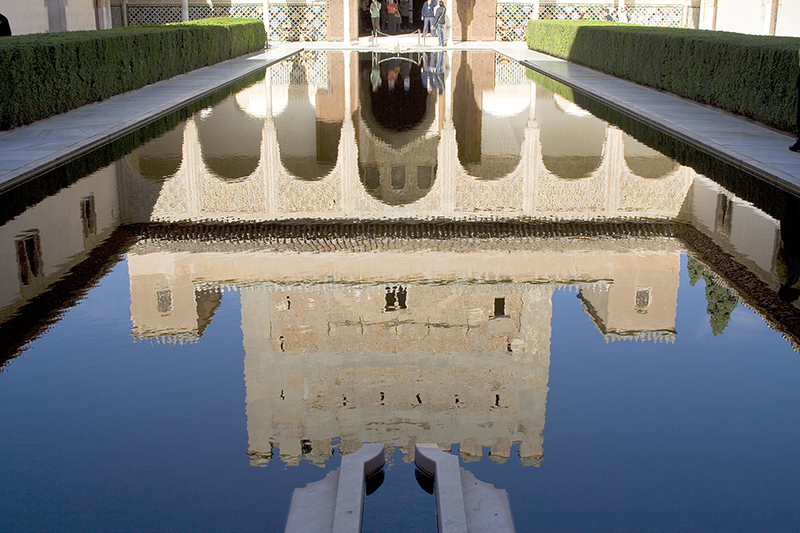 Perched on a strategic hill dominating Granada, the citadel of the Alhambra reveals a collection of lush gardens and magical palaces, the only royal residences of an Islamic dynasty still standing since the Middle Ages. Courtyards, where water is omnipresent, and walls, covered by refined geometric and floral motifs, recreate in a codified manner the image of the Garden of Eden. During the three-hour visit, your guide, an expert in Islamic Art, will explain the secrets and symbols contained in these palaces worthy of the Arabian Nights - the mathematical achievements, the philosophical concepts and the metaphors of the poems carved on the walls, a reflection of a whole civilization. Note: It is very important to make the reservation long before the visit, because a limited number of tickets are sold out every day. Duration of the tour: 3 hours. Optional tour of the historical quarter of the Albaicín, discovering a labyrinth of enchanting streets and panoramic views: 1 h 30. Distance Cordoba-Granada: 2 h 30 by car.

TWO WONDERS OF THE RENAISSANCE: ÚBEDA AND BAEZA

Discover two jewels of the Renaissance: Úbeda and Baeza. The two historical cities located in the north of Andalusia received in the early 16th century extensive patronage from the highest Spanish aristocracy, which bequeathed us a fabulous artistic and architectural legacy. We can visit both towns (declared World Heritage Sites by UNESCO) during a full day tour In Úbeda, the Vázquez de Molina Square concentrates treasures of the Renaissance, in two churches (Sacred Chapel of the Saviour and the Gollegiate of Saint Mary), and two palaces (of the Dean Ortega and Palace of the Chains). The historical town is still protected by its ancient walls, from which it is a delight to gaze at the surrounding “ocean of olive trees”. The city of Baeza possesses other wonders of the Renaissance all around the central Square of Saint Mary, where the Cathedral and the Seminary of Saint Philip Neri stand. The Palace of Jabalquinto, with its adorned façade, represents an interesting example of the transition period between the Flamboyant Gothic and the Renaissance. Duration: approx.. 2 h 30 hours for each town. Break for lunch. Úbeda is 1 h 40 drive from Córdoba. 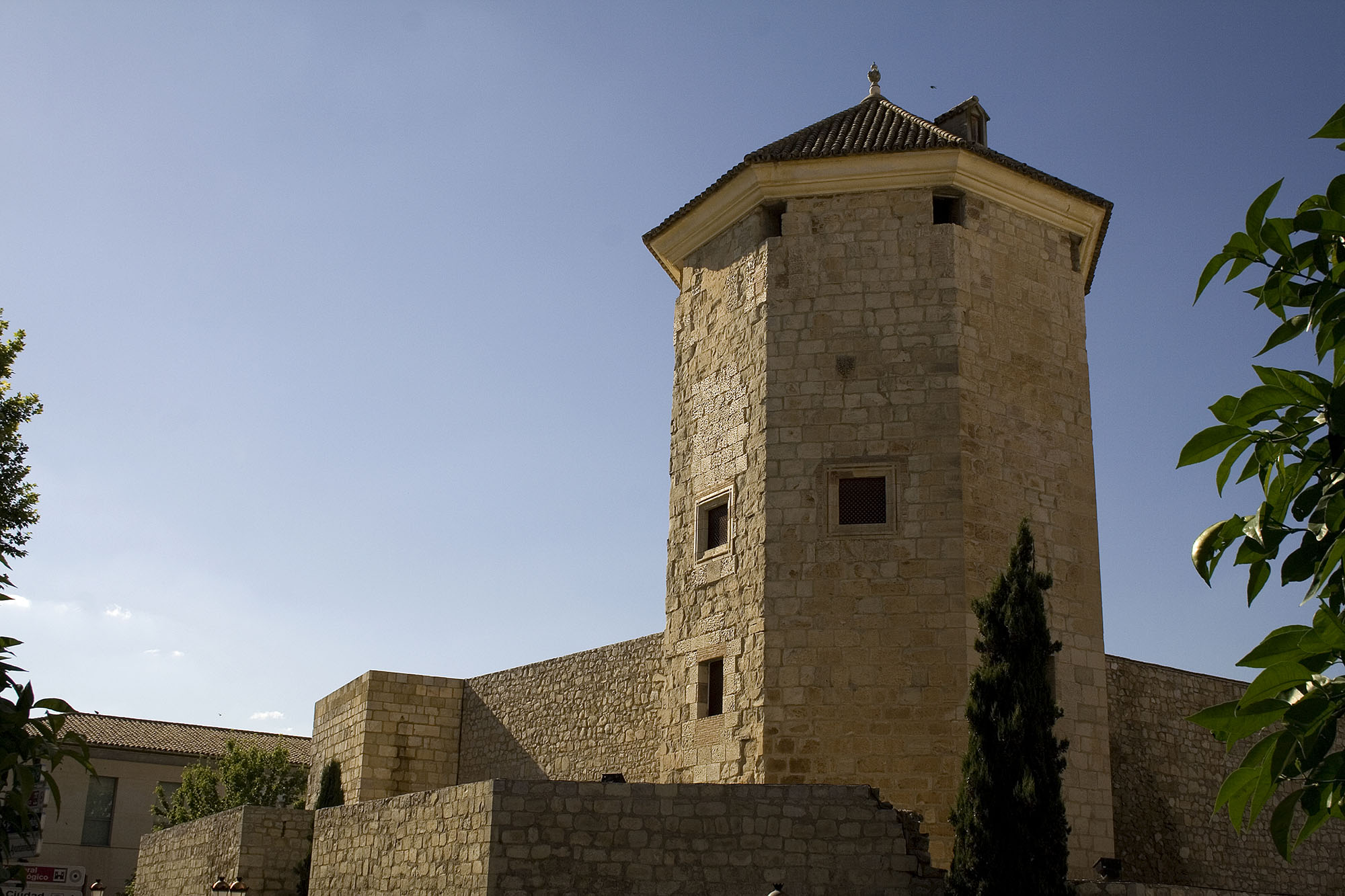 LUCENA: THE PEARL OF SEPHARAD

The city of Lucena experienced a time of splendour in the Middle Ages, when it became the main Jewish town of the al-Andalus. Lucena (Eli Ossana in Hebrew) earned the name of “Pearl of Sepharad” because the city was almost completely Jewish. The importance of its Yeshiva made Lucena centre of the most reputable Talmudic study in Sepharad. An ancient Jewish cemetery was found in the outskirts. It constitutes the best-preserved Jewish necropolis in Iberia. The guide will go over the Jewish history of this beautiful town, where the memory of the culture of exile remains on its streets, churches, castles and traditions. Duration: 3 h 30. Distance: 50 minutes by car. 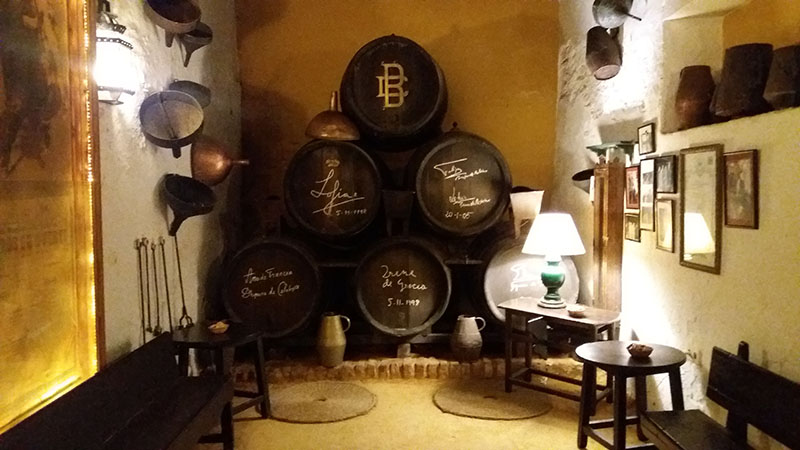 THE FLAVOUR OF THE OLD ANDALUSIAN TAVERNS

Taverns in Cordoba represent the playful, lively and communicative heritage of Andalusia. These are meeting places where your guide will introduce you to this genuine cultural tradition in a cosy atmosphere. Drinks are on the clients. Here you will taste wonderful and exquisite tapas, typical food of our land. Duration: 2 hours

LUNCH IN A SELECTED RESTAURANT, WITH BLEND OF CULTURAL SAVORS

Arabic cuisine will be the catalyst needed to amalgamate the sediment of all the other cultures that have inhabited Andalusia. It is a case of refining the Arab and North African influence on Andalusian cuisine, because it was a masterly summary of the flavors of all the other earlier great Mediterranean culinary cultures. It is also a case of researching and applying that knowledge to the most modern cooking. Only then can we recover the Hispano-Muslim cuisine, along with that of the Celts, Tartessos, Greeks, Phoenicians, Hebrews, Romans and Visigoths.

The prayer hall of the Mosque is composed of a spectacular forest of more than 1000 columns of marble, jasper and granite, supporting overlapped arches. This masterpiece of Islamic architecture, a result of successive extensions and embellishments during more than two centuries, displays the evolution of the Cordoban Umayyad art, since the primitive mosque founded by Abd al-Rahman I in 785, to the heyday of the extension constructed by the caliph al-Hakam II, with the magnificent poly-lobed arches, ribbed domes and the mihrab, adorned with delicate mosaics proceeding from Constantinople. In the heart of the prayer hall resides the vertical Cathedral which was installed after the Christian conquest. It combines interesting samples of Renaissance and Baroque architecture.

Next to the holy temple is the Judería, the old Jewish Quarter which houses a synagogue of the 14th century, testimony that Cordoba was once a beacon of the Sephardic culture and birthplace of the philosopher Maimonides.

Cordoba perpetuates remarkably with its historical neighborhoods a dignified personality, in the sinuous net of immaculate white passages and in the intimacy of its blossoming patios whose colors and fragrances are wildly extravagant during the “Festival de los Patios” in May.

To capture the splendour of the Umayyad Caliphate, it is necessary to make a detour to the Palatine City of Madinat al-Zahra’ which exhibits a collection of sumptuous palaces seated on the slopes of Sierra Morena and overlooking the green Guadalquivir plain.

If you not change browser settings, you agree to it. Learn more